CRTC Reverses Lower Internet Price Mandate: What Does it Mean for Canadians?

In May 2021, the Canadian Radio-Television and Telecommunication Commission decided to overturn its own 2019 decision to decrease internet rates in Canada. The decision, made two years ago, was a boon for Canadians because it meant big telco companies weren’t able to overcharge consumers. For two years, Canada’s telecom giants appealed the decision in court with little success.
But then, the CRTC chose to double back on their decision. Let’s take a look at how Canadians will be affected by this, and how KWIC is ready to meet these challenges head-on while putting consumers first!

Depending on the Provider, Internet Prices May Rise

The numbers are staggering. According to a study by WhistleOut, the price for high-speed internet has risen by 4.31% on average in the past year, and the price for normal plans has increased by 6.42%, far outpacing inflation increases. The average Canadian is now paying $102 per month for internet service. If you’re with a big telecom company, you’re likely paying more already for your plan.
With smaller providers, you’re paying less for essentially the same services. Small providers pay to use the networks of larger providers. With this new decision, there’s a possibility of an increase in price from smaller providers, but it won’t compare to what you’ll be paying with a big telecom company. In that same WhistleOut study, 40% of Canadians have voiced concerns that they won’t be able to afford their internet plans anymore if the cost rises by another 5%. If you’re in this boat, you’re not alone, and it might be time to abandon ship and consider a smaller provider.

Some May Have to Adjust Their Services

If you’re one of the many Canadians who can’t afford their plan from a big telecom company, you may have to change up how you’re getting internet service in the first place. Now’s the time to consider where you’re getting those services from and how you want to receive them. Smaller providers offer cable and DSL internet services which are highly capable, zippy, and cost-effective. You could also consider an independent ISP, also known as an internet reseller. Perhaps the most attractive aspect of these is the fact that they’re relatively inexpensive.

Remote Workers Could Have a Hard Choice to Make

During the COVID-19 pandemic, many businesses have implemented a work-from-anywhere policy to keep employees safe and comfortable. With internet prices increasing, this may not be possible for everyone nowadays. The WhistleOut study from earlier should again be called to attention, indicating that 23% of Canadians have plans to switch to high-speed internet plans. Those with larger, costlier providers may have to switch to a lower-speed internet plan as a result, which will interfere with their work capabilities, or they just might have to return to the office altogether since all remote work requires regular, stable internet access.

There are two types of competition styles when it comes to internet service you should know about: facilities-based and service-based competition. The CRTC strongly believes in the former, which is possible when you have multiple providers competing to provide the same or similar services through different delivery methods. Big telecom companies fall under this category.
This isn’t a system that works well for rural areas. However, many smaller ISPs use service-based competition. Since they are leasing internet access from big telecom companies, they can focus on providing services instead, including having excellent support teams that are actually available. For higher speeds, smaller providers will generally offer DSL or wireless technology that is always maintained. Their clients are the core of their business, so they’re always looking for ways to help them while still offering an ideal feature set, speeds, and otherwise.
Are you facing high internet bills as a result of the CRTC decision? Finding the right ISP for your budget and use case is more important than ever. At KWIC Internet, we understand how crucial it is to stay connected while keeping your monthly bills under control. That’s why we offer high-speed, reliable internet services with highly beneficial features in a wide array of pricing options. Combined with best-in-class support and a commitment to service quality, you get the best of both worlds. Contact us today to find a plan that’s right for you! 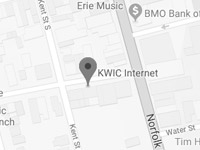